Both of us here at Frogmind have a long history of gaming starting from the late 80’s. We have played thousands of different games starting from Commodore 64 all the way to the new iPad. In the process we have learned what are the elements we like and dislike in games and in game business.

We think that games should be developed by constantly thinking from the perspective of the player. The player eventually playing your game is the king. He/she is the person whose enjoyment is in the hands of your game. Thus, the end-user experience is the most important goal in our games and we want it to be flawless in BADLAND. We think we are able to achieve this as we are active gamers ourselves. We are developing BADLAND for us too. We want to enjoy it as much as you will do.

So, what do we think brings better gaming experience in games especially in iOS devices? Let us give a few examples:

We think that immersion is very important in games. The best games are those which really give the player the feeling that he/she is in the game world. It can be really hard to get the mind to the game’s world but it’s super-easy to get it out there. For example, while playing, a pop-up suggesting you to spend real money to buy stuff, is the prefect immersion killer. Seeing real world references, such as price tags with real world money currency, can easily take the player’s mind away from the game world spoiling the gaming experience. Moreover, spending real money is not fun and still so many games remind constantly the player about it with different in-app purchase possibilities. In our opinion, this eventually ruins the game’s fun. We are not saying that in-game purchases in general are bad thing but they can be done wrong so easily. For example, we think that buying additional real content, such as level packs, inside the game through menus can be totally OK. Another example of ruining the immersion is to underestimate players by having lengthy tutorials explaining everything by hand. We could continue with more examples how to spoil the immersion, but these two are good examples as they can be seen in games in the AppStore. We want to make sure that you have as immersive gaming experience while playing BADLAND as possible.

Another good example of what we like in games especially in Apple’s iOS AppStore is their universality. When developing a game or any application to the AppStore, the developer can decide whether to develop the game as a universal application or not. A universal application means that the application has been designed for all the iOS devices: iPhone, iPod Touch and iPad. In most cases it means that the end-user can play the same game in all of his/her iOS devices with the UI and the graphics designed for each device separately. With universality, given that the game is available for all of the iOS devices, the player does not need to buy multiple versions of the game in order to get the best experience in all of his/her devices. Only one purchase is required. We think that players want to play games in all possible iOS devices they own with best gaming experience possible, but do not want to buy the same game multiple times. Thus, BADLAND will be an universal application with the gameplay, the UI and all the graphics designed for the iPhone retina resolution, the iPad resolution and for the new iPad retina resolution. You get all this with one purchase, and after that, you can play BADLAND with beautiful graphics with all your iOS devices.

This list could go on with more examples, but we hope that these two examples give you some grasp of us as game developers and what kind of gaming experience we want BADLAND to be. Feel free to ask us questions in the comments or in Twitter/Facebook.

This week’s big thanks go to:

In the next blog post Juhana is going to start a blog post series concerning the creation of the visual look of BADLAND. The picture below is a quick sneak peek of the series. 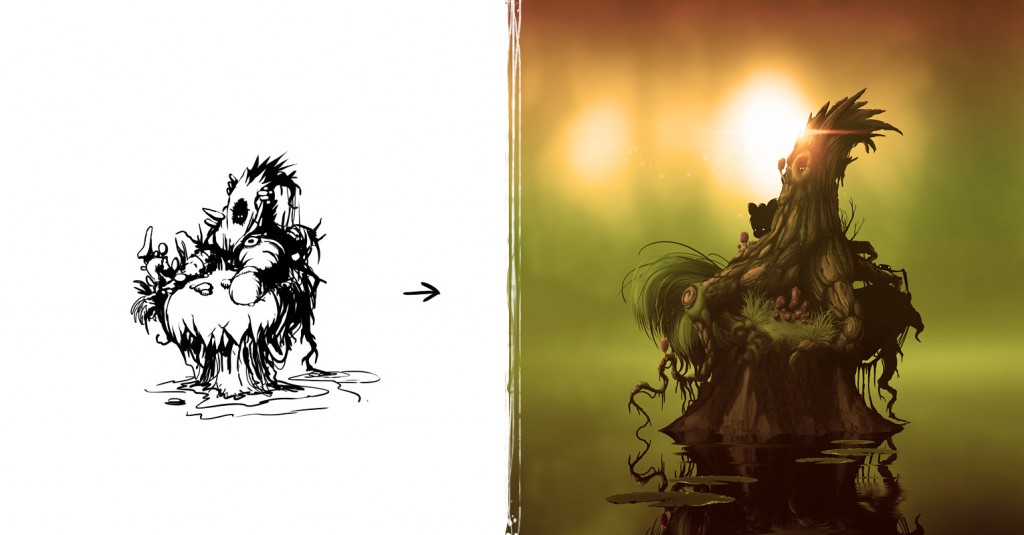